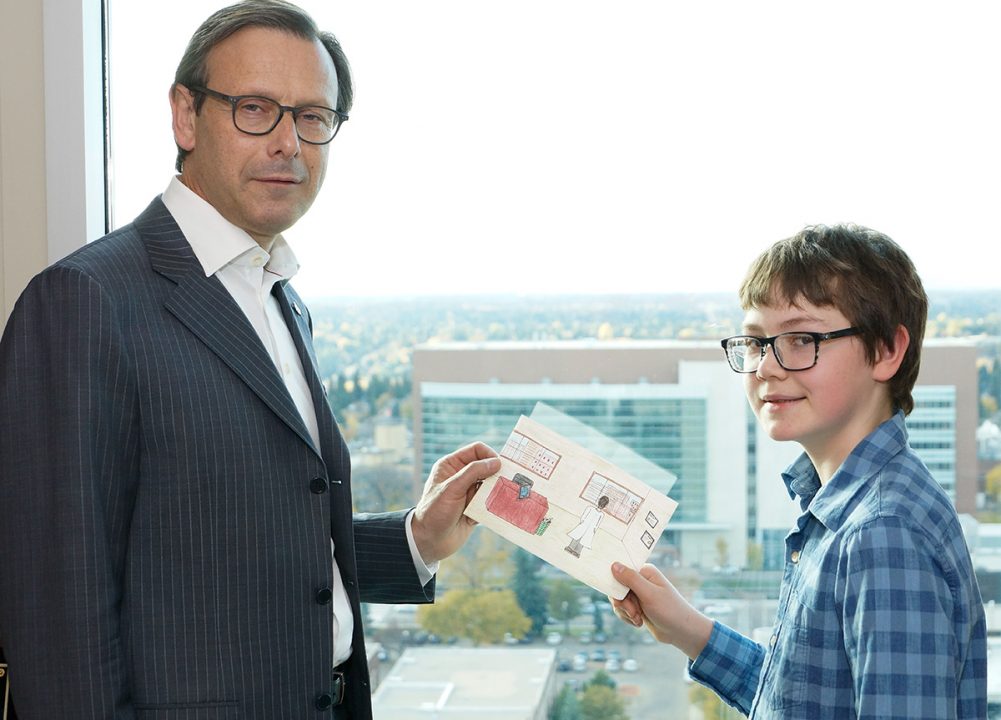 Mind you, he did have a head start. He was barely two years old when he began.
Granted, he was too young at the time to understand why his parents were bringing him and his sister in their double stroller on a fundraising walk.

At that time, the spring of 2005, Cole has just been diagnosed with Type 1 Diabetes, and his parents, Andrew and Marilee, were determined to learn as much as they could about the dis-ease.

“We were living in Whitehorse, Yukon, and because of the small population, we didn’t have the resources you have in a big city,” Marilee recalls from their acreage home near Spruce Grove. “We didn’t know anything about diabetes and we wanted to tap into all the knowledge that other families offered. And the annual fundraising walk was the event that drew everyone to-gether.”

The lack of resources that comes with living in a small centre also meant a lack of awareness among both the public and health-care professionals.

Cole’s parents had taken him to the emergency room several times to find out why he was so sick. But it was not until he went into a diabetic coma that he was diagnosed with Type 1.

“When Cole got sick, the doctors suspected meningitis or pneumonia. But our paediatrician had just returned from working at the Stollery and she recognized the symptoms of diabetes. She saved Cole’s life.”

Cole, only14 months old, was put on a medical emergency flight and flown to Edmonton’s Stol-lery Children’s Hospital. It was the beginning of the family’s learning curve of managing an in-fant’s illness, as well as their advocacy to raise awareness.

Among the family’s volunteer activities was going door-to-door seeking pledges and partici-pants in the fundraising walk.

“For the first couple of years, we would explain that our son had diabetes,” says Andrew.
“By the time Cole was four, he was starting to talk to people about it himself.”

By the time Cole was in kindergarten, he was sharing with his classmates his day-to-day ex-perience living with diabetes. As one of the two youngest patients ever to have received an insulin pump at the Stollery, Cole had a unique story to tell.

Fundraising on the doorstep, he found that people were interested in learning about his chal-lenges and how diabetes affected his life.

“I would tell them I’d have to do a blood sugar test before every meal. And that averages out to 10 blood tests every day. I have to change my insulin pump sites every second day and that I have to take insulin to keep my blood sugars in check so that my sugars don’t go too high or too low.”

He liked doing his bit, both to raise money and to raise awareness.

“I’d say something along the lines of my name is Cole Byers and I’m raising money for diabe-tes. Sometimes, they ask what that is, or sometimes they’d know what that is. I’d give a short explanation, tell them about the walk, ask if they were interested if coming.”

“I want to raise money to help find a cure for diabetes for myself and all the other people around the world who are living with the disease.”

To reach his goal, Cole set up a crowd-funding page through Canada Helps.

In November, Cole was recognized with a Youth award on Philanthropy Day for his years of fundraising.

Cole is well on his way to raising the $10,000 this year that he needs to meet his annual goal.
He’s focussing his efforts on DRIFCan to support Dr. James Shapiro’s team because he be-lieves a cure is within sight.

Cole, whose passion is drawing, has expressed his faith in Dr. Shapiro through a piece of art. It shows a man in a white lab coat staring out a window at a cityscape, his back to a trash can overflowing with insulin injection needles.

Dr. Shapiro often uses a slide of Cole’s drawing in his presentations. “This is a picture of me looking out the window when diabetes is cured and now there is no work to do,” he says with a smile. “And I certainly look forward to that day.”

What we’re talking about

Welcome to DRIFCan!
Sign-Up for our Newsletter
Get the latest news delivered to your email inbox.
Don't worry, we won't spam you, and you can unsubscribe anytime! (Be sure to check your spam/junk folder for our emails)