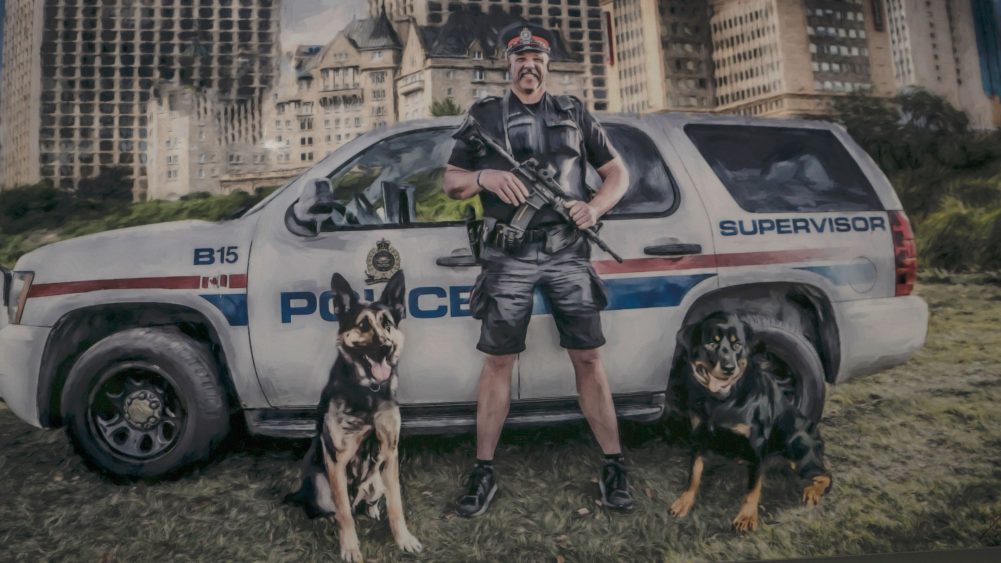 Pat McCormack remembers the exact date he was diagnosed with Type1 diabetes: May 25, 1991.

But an even more vivid memory is the one where he learned the implications of his diagnosis, both on his life and on his career.

At the time, Pat was 27 years old and about to achieve his dream as a dog handler with the Edmonton Police Service.

The moment that the effects of diabetes crystallized for him was dramatic.

“I was on the passenger side of the police car, with my partner driving. We were following a suspicious vehicle and my partner asked me to read the licence plate. I asked him to get a little closer so I could read it.

“He looked at me with an alarmed look on his face. And he said ‘If I get any closer, We will be in front of them. We need to get you to the hospital.’ He was right. I had no idea that my vision was that bad.”

Pat had been diagnosed a few days earlier by a doctor who minimized the seriousness of diabetes and booked him an appointment with the diabetes clinic for three weeks later.

“I knew something was wrong. I’m 6’8” and weighed 250 pounds but I was eating like a horse and drinking an incredible amount of water. And I was always thirsty.”

He found out just how wrong things were when his partner insisted he go to the hospital immediately.

“The doctor looks at me and says ‘You don’t look too good.’ They put me on a gurney and took my gun. They put me on an IV. It took six bags to hydrate me. They told me I wouldn’t have lived till Sunday. When they admitted me to a room on the fifth floor, the doctor told me I was done with police work.”

The idea of working a desk job with EPS was devastating.

Pat was referred to Dr. Keith Bowering, the endocrinologist who remains his doctor to this very day.

“He told me to prove to him that I could handle diabetes before he’d consider giving me back my gun and a class one licence.”

It was a challenge. As a police officer, Pat worked shifts and long hours that were often unpredictable. It’s a job that is the antithesis of established routines, whereas controlling diabetes is all about keeping routines. Learning how to manage his diabetes meant eating the right food, in the right amount, always on hand, as well as constant monitoring of his blood sugar levels and injecting insulin.

“It was a huge learning curve. They wanted me to learn to eat half a bananna at 6:45 a.m., a half a cup of milk, that’s just not in me to do. But I had to learn to improvise adapt and overcome this. I’d take the same food and the same insulin every day, until I was able to get a handle on things. I never let diabetes control me. I control it.”

With Pat’s determination to become a dog handler, it only took him six months to prove to Bowering that he was ready to “go back to the street.”

He went on to prove that he could handle the rigours and unpredictability of police work: His career with EPS spanned more than 28 years. During that time, he worked as a homicide detective, putting in 18 to 20 hours a day.

“When you’re investigating a homicide, you’re pretty much sleep-deprived for the first four or five days. It’s the kind of thing where you slept in your chair and kept clean underwear in your desk drawer.”

As a police officer who managed his diabetes successfully, Pat was often called on to help other EPS members and families struggling with diabetes. His mentorship to them led him to get involved with other diabetes organizations, eventually leading him to DRIFCan.

He was drawn to the organization because it raises money solely for Dr. James Shapiro’s team.

“DRIFCan doesn’t have high-priced help and administrative costs that eat up the majority of donations. Our money goes directly to Dr. Shapiro. I like supporting research in our own backyard.”

Pat, who has three adult children of his own, now dreams of the day when no young person ever hears the kind of news he received back in 1991.

“I want to do my bit to help find a cure for diabetes so that kids can just be kids.”

What we’re talking about

Welcome to DRIFCan!
Sign-Up for our Newsletter
Get the latest news delivered to your email inbox.
Don't worry, we won't spam you, and you can unsubscribe anytime! (Be sure to check your spam/junk folder for our emails)